WHAT’S HAPPENING OUT THERE?

We as employees of a company, often operate in our own space and the activities of others are sometimes lost on us. Below we will try and give some insight into what functions and services are being provided by either your colleagues of the Gauteng Branch or the employees of other branches of Southey.

The branch in Richard’s Bay provides a number of the facilities in the area with conveyor wind guards. Richard’s Bay, being an export terminal, is littered with conveyor systems and, as is common at the coast, the wind blows. These wind guards prevent the materials being transported by conveyor from being blown off, thus reducing waste and pollution. This is another innovative idea that was developed by the very capable and inventive personnel working there. 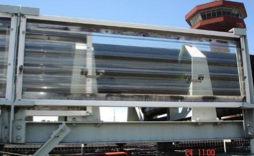 Conveyor Windguard in place on a conveyor in Richards Bay